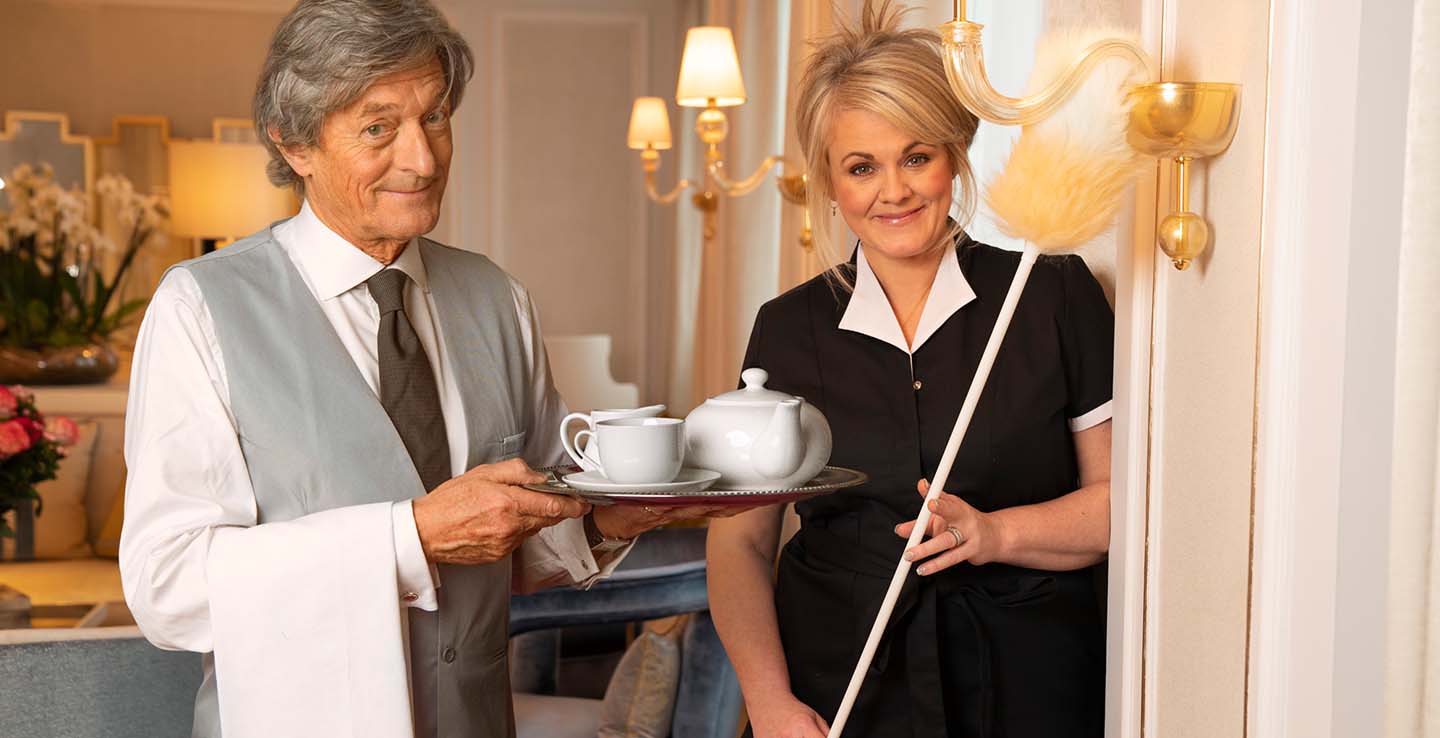 Bovey Castle, the exclusive five-red-star hotel and country estate located in Dartmoor National Park, Devon, will be featured in a four-part Channel 5 documentary Posh Hotels with Sally and Nigel on Friday 22 February 2019 at 9pm.

The series, presented by Sally Lindsay and Nigel Havers, begins on Friday 1st February and will go behind the scenes at four of Britain’s most luxurious hotels. Sally and Nigel get to check in to various hotels to investigate what it takes for hotels to deliver five-star service and wonderful hospitality to their customers.

At Bovey Castle, Sally Lindsay and Nigel Havers get to experience life at the hotel as both guests and members of staff, painstakingly ensuring that guests have a superb stay. Nigel Havers and his dog Charlie are booked into a lavish (dog-friendly) suite which provides a Very Important Pooch (V.I.P.) service that includes matching Barbour jackets for them both to wear. Nigel heads out on to the estate for a spot of deer stalking in the new Deer Park, while Sally helps to prepare venison – part of the hotel’s £500 per head exclusive Deer Stalking Dinner – in the Great Western Restaurant’s gleaming kitchen. Sally also tries gin tasting and the less glamorous job of cleaning windows, while Nigel lends his hand at French polishing – taking advice from one of the hotel’s expert polishers. He also tries out one of Bovey Castle’s unique spa treatments – a deep tissue massage using golf balls. Nigel is also on caddy duty while Sally enjoys a round of golf on the hotel’s immaculate 18-hole championship golf course.

Says Mark Chambers, Managing Director, Eden Hotel Collection: “We are thrilled to be part of Channel 5’s new series highlighting the very best luxurious British hotels. The final episode on Bovey Castle demonstrates the meticulous attention to detail and many behind-the-scenes jobs which make Bovey Castle what it is today – one of Britain’s most exclusive hotels providing exemplary hospitality.”

Since the Eden Hotel Collection acquired Bovey Castle back in 2014, the hotel has won numerous awards, the most notable of which is five red AA stars in 2017 for its exceptional hospitality – the AA’s highest possible accolade.

On-site experiences include falconry, cider and sloe gin-making and 4×4 off-road driving. Last year, the hotel opened its new Deer Park within the estate.

The hotel has recently won two awards at the prestigious South West Tourism Excellence Awards 2018/2019: Large Hotel of the Year (Gold award) and Restaurant / Bistro of the Year (Bronze award).

Bovey Castle is a member of Pride of Britain Hotels – a collection of never more than 50 luxury UK hotels to guarantee quality and exclusivity.

Luxury Bovey Break: Stay for two nights at Bovey Castle from £599 per room/£300 pp (two sharing) including two nights’ accommodation in a Classic Room with full English breakfast, dinner on one night in the Great Western restaurant (£65 pp allocation) and dinner on the second night in the Smith’s Brasserie (£40 pp allocation), a bottle of Champagne upon arrival, a tour of the deer park and access to the Elan spa. Offer valid until 30 June, subject to availability. Call Bovey Castle on 01647 445 000 (www.boveycastle.com).